Microcredits – a way out of oppression 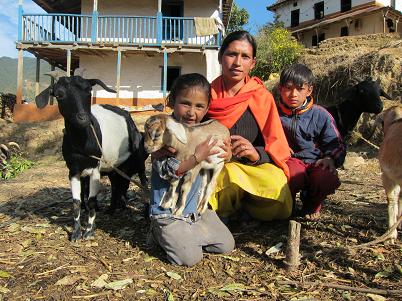 Kamu Sunuwar hopes to generate more income from raising goats. Then her children Amrita and Amit can get a good education.

She is not discriminated anymore for being Dalit. She now dares to talk to people. Membership in a microcredit group for women in Nepal has brought radical change to Kamu Sunuwar’s life.

Text and photo: Elisabet Back

There was a time when it was forbidden for Dalits in the Nepalese village of Bhardeu to visit other people’s houses and eat together with their neighbours.

”If we touched the food that they were going to eat, they thought that the gods would become angry and make them ill,” 28-year old Kamu Sunuwar says.

But all of this has changed for the better thanks to microcredit groups. Together with a local partner organisation, SOLVE Nepal, the Women’s Bank of Finland has formed 13 women entrepreneur groups in the villages Bhardeu and Chaugare, which lie in the mountain region a few hours drive south of the capital Kathmandu. Kamu Sunuwar has joined one of the groups.

”We’re not oppressed in the group and our situation in the rest of the village has also become better. Only a few households are still prejudiced against us.”

When she was about to join the group Kamu Sunuwar was afraid what would happen when the members of the group would eat together.

”But the women were tolerant. They understood that everyone needs to eat.”

She and the other Dalits in the village are nowadays welcome in the homes of the other villagers. ”I feel so happy about this,” Kamu Sunuwar says and adds that she has become more outspoken thanks to the group. Previously, she was scared that she would be misunderstood if she spoke.

”The staff at SOLVE Nepal said that we have to say what we need, otherwise they can’t help us. Automatically I felt the urge to speak and I did. Now I don’t hesitate to speak to anyone. I have also learned about my rights.”

Kamu Sunuwar and some friends within the group took a loan to raise chickens.  Unfortunately that project was not as successful as the rest of her story. Many of the chickens died because of the cold or of diseases. They sold those that survived, but still suffered an economic loss. However, Kamu Sunuwar is not discouraged by this setback: ”I have goats and I would like to learn to sew and dip candles.”

Seven goats are wandering around in front of the house, eating grass and leaves. ”Maybe you can try to expand your goat farming. We can teach you ways to rear them better,” Naramaya Rana from SOLVE Nepal says.

Education for her children

Kamu Sunuwar is raising her two children Amit and Amrita alone since her husband left her for another woman.

”Previously my parents had to help me, but now I can handle the costs all by myself. I have been able to buy school material for my children, among other things”, she says proudly.

Just like the other women entrepreneurs in the group she would like to see her children get a good education.

”I myself only went to school for two years before I had to start working. I had so many sisters and brothers and was expected to take care of them. Because of this I want my children to go to school for as many years as they would like to. I don’t want them to become like me.”

But interest in school is not always that great among children in Nepal, just like in most parts of the world. 11-year old Amit and 7-year old Amrita refused to go to school this morning.

Amit explains what happened this morning. “I like school, but I didn’t find anyone that wanted to walk to school together with me. Anyhow, I want to become a policeman and catch thieves, because I know what’s right.”

Amrita shows up with a pencil and notebook and sits down next to her mother. She writes, line after line.

”I go to school every day.”

FACTS
• The entrepreneur groups in Nepal were started in 2009 by the Finnish fund Women’s Bank, which belongs to the organisation Finn Church Aid.
• The project is focusing on under-privileged women – Dalits, landless and/or sole supporters of their families.
• There are 13 groups in the villages Bhardeu and Chaugare, south of the Nepalese capital Kathmandu. There are also groups in the Kanchanpur district in western Nepal, where many of the members are Dalits.
• Every bank group has about 20 female members. They have themselves chosen whom to invite to the group and often know each other already.
• The group gets a starting capital from Women’s Bank. The bank members hold a meeting every month when they save 50 rupees (0.54 Euro) per person.
• The women can take a loan from the sum that the group has collected. The loans will be paid back within a time frame chosen by the group. For example 5000 rupees (appr. 54 Euros) is paid back over three months. The group also decides the interest rate.
• The loan should be used to start an activity that generates income. The Nepalese women are engaged in for example sewing, raising of pigs, goats or chickens, and vegetable farming.
• The local partner organisation of Women’s Bank, SOLVE Nepal, supports the women during the meetings. SOLVE Nepal also arranges training and seminars for the members of the groups and sometimes for the whole community. The themes can be business making, sewing courses, gender issues.
• The benefits of the projects are not only financial. The women become self confident thanks to the friendship and support they find in the group. They realise how important education is for children, especially girls.

Elisabet Back is the foreign news correspondent of Finland’s leading Swedish language newspaper, Hufvudstadsbladet. She visited Nepal earlier this year as part of a degree in South Asian studies. IDSN thanks Elisabet Back for contributing this translated version of her article, which was originally published in Swedish.