Dalits are “skilled, honest and industrious” 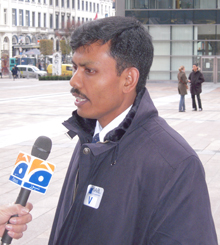 Bhakta Bishwakarma gave a television interview during a lobbying trip to Brussels in November 2009. Photo/IDSNBhakta Bishwakarma, 40, is a leading Dalit human rights activist. In this interview, he tells IDSN about the struggle for Dalit rights in Nepal – and what it, to him, means to be a Dalit.

When Bhakta Bishwakarma went to school in his home village in a remote part of Nepal in the 1970s, he got on well with many of his fellow students. He came second in his class, made good friends and was generally popular. But one thing set him aside – the fact that he was a Dalit.

“Even the upper caste students liked me – they brought me books and were friendly. But when we were drinking water and eating, they would go to one bench, and I would go to another. I was allowed to enter the school staff room, but I could not touch the water tap. Other students could drink water from that tap, but I was not allowed to do so,” the law educated activist, who has worked for Dalit rights for most of his adult life, recalls.

During that period, such patterns of behaviour were considered normal and not discriminatory. People of higher castes did not discriminate openly, but there was a clear social hierarchy.

“That was our place. I felt strange, but I could not oppose it. However, when I reached the sixth or seventh grade I understood that something was wrong.”

Today, caste discrimination is still rife in Nepal, but the country’s Dalit movement is calling for change and lobbying for a more inclusive constitution that will protect Dalit rights. According to Bhakta Bishwakarma, there is also an emerging consciousness about the meaning of the word Dalit.

“Many people consider Dalits inferior, and many feel embarrassed about being Dalits. The word symbolises someone who is oppressed and at the bottom of society. We are now trying the redefine the word, to make it positive. To me, a Dalit is someone who is skilful, honest and industrious,” Bhakta says.

Non-Dalits should also be involved

Attitudes in Nepalese society are gradually changing. While atrocities are still committed, and often with impunity, the younger generation appears somewhat more relaxed about caste differences. There is, however, no room for complacency, and Bhakta finds it necessary to involve all generations – as well as non-Dalits – in the fight against discrimination.

“By involving non-Dalits, we should make them understand that it is a crime to discriminate.”

Many problems remain. Among the most serious ones, according to Bhakta, are political divisions in Nepal’s emerging democracy, and the fact that the parties often use marginalised groups, such as Dalits, for their own political purposes. He also points to the fact that Dalits are scattered and that unity among them is hard to achieve. Every-day discrimination against Dalits continues to be an issue, many Dalits are uneducated, and poverty is a great challenge.

“More than 60 percent of Dalits cannot feed their families for more than six months of the year,” he notes.

If Bhakta is to name one step that will change things significantly, he argues for an intensified focus on education. With more and better education for everyone, including Dalits, he hopes and believes that the future will bring about a complete demolition of the caste system. Perhaps then, there will be no such concepts as a “higher caste’ and  ‘Dalit’ anymore.

“One day,” Bhakta Bishwakarma concludes, “we shall remove these definitions.”

Profile: Bhakta Bishwakarma is the National President of the Nepal National Dalit Social Welfare Organization (NNDSWO) and a lawyer by profession. He is at the forefront of the fight for the inclusion of Dalit rights into Nepal’s new constitution.

Since its inception in 1982, NNDSWO has been striving for human rights, social justice and development for the Dalit community in Nepal. The organisation has particularly focused on the liberation and sustainable rehabilitation of Nepal’s bonded labourers. Bhakta Bishwakarma is involved in dialogues with major donor agencies in Nepal on Dalit policies in development aid.