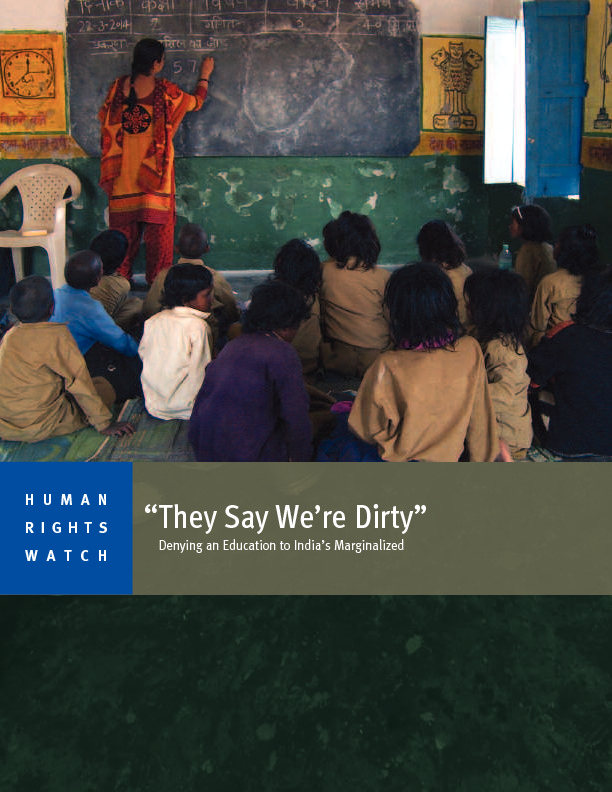 Dalits, Adivasis and Muslims are most at risk of dropping out of school and being denied an education in India – states the comprehensive report “They say we’re dirty” – Denying an Education to India’s Marginalised, just released by Human Rights Watch.

The authors of the report interviewed hundreds of students, parents, teachers and officials who painted a clear picture that India’s ‘right to education act’ was failing due to both inadequate guidance and the inability at both state and local level to implement laws and guidelines meant to tackle discrimination in schools.

The authors conclude that,

“Ensuring the success of India’s Right to Education Act is an ambitious and worthy project … Until the government creates and enforces protocols to monitor vulnerable children, and ensures that schools become inclusive child-friendly places of learning for marginalized children, the project will falter.”

The report includes numerous cases of Dalit children who are discriminated against at school to such a degree that they feel forced to drop out. The dropout rate from elementary school for Dalit children is 51% while the national average is 37%. Those who are the worst hit are adolescent girls whose dropout rate is 64% and even higher when the girl is a Dalit, Adivasi or Muslim.

A father of a child in a Government school in Bihar explained to the researchers that,

“They don’t learn anything, and are asked to sit separately, served food last when there is often nothing left. The Kurmi [dominant caste] children are asked to sit in front. They chase away the Musahar [Dalit] children and feed the higher caste first. They give leftovers to our children.”

The report is full of quotes from Dalit children who explain that they are forced to sit in segregation from the other children in the class, they are not taught and give books, they eat their meals from separate plates, they are harassed, ridiculed and assaulted by other children and sometimes beaten by teachers. The report cites the Director of the Delhi based Centre for Social Equity and Inclusion, Satyendra Kumar,

“Dalit children are made to feel inferior in schools and the schools reinforce caste norms. When it comes to any manual work such as cleaning of classrooms or picking up garbage, it’s always the Dalit children who are asked to do it.”

Socio-economic factors such as poverty, child-labour and migrating workers also contribute to the high dropout levels for Dalits and Dalit girls are often married off early or taken out of school to contribute with household tasks or labour in fields, brick kilns, textile making, rag-picking, begging, minding of livestock or other labour. Widespread corruption is another factor found to impact the provision of education for all in India.

At the heart of all this is the issue of a very weak implementation of the Governments educational policies which, despite the high rates of school enrolment, results in low attendance and high drop-out rates for children from marginalised communities subsequently pushing children into the labour market, leading to the continued failure of the Government’s policies on child labour.