Maila Mukti Yatra – a march against the practice of manual scavenging – was completed in four Indian states during a 25-day period in November and December 2009. 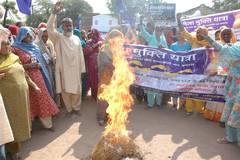 Dalit activists have succeeded in liberating more than 500 women from the vile, inhuman and officially banned practice of manual scavenging.

During a march across four states – Maharashtra, Rajasthan, Uttar Pradesh and Madhya Pradesh – the group of more than 50 activists came into contact with at least 1400 female manual scavengers and persuaded a significant number of women to leave this practice.

Whenever this happened, equipment used for manual scavenging was burned in a public place in the given village, and it was announced that the practice had been abolished. Dry latrines were also destroyed as part of the campaign.

After 25 days of marching and a considerable amount of media coverage, the Maila Mukti Yatra finished in Bhopal on 1 December. Many of the participating activists were themselves former scavengers. The march was coordinated by the NGO, Jan Sahas Social Development Society, which strives to protect Dalit rights.

Manual scavenging is a caste-based and hereditary occupation for Dalits that is predominantly linked with bondage. It is estimated that around 1.3 million Dalits in India, mostly women, make their living by removing human excrement from dry toilets and sewers using basic tools such as buckets and baskets, carried on the head.